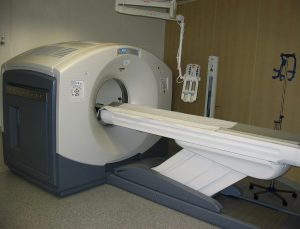 A few days ago, I had a scan for cancer called a GA-68 or gallium-68 or Netspot. This was designed specifically to detect neuroendocrine tumors. My own results are reported here:  The Results of my GA-68 Scan.

EDIT: There has been tremendous response to these two posts on social media. The most frequent question is “Where can I get a gallium scan?”.  I now can show you two sources:

I figure it might help other people with NETS to explain what this scan is.  If you have had a cancer or know people with cancer, you probably know that a PET (Positron Emission Tomography) scan is used to try to locate tumors and metastases.  The traditional PET scans normally do not work with neuroendocrine tumors because the biology of the tumor is different than most cancers so the standard markers do not function.

One year ago, the FDA approved a different kind of marker for use with PET scanners that is specifically designed for neuroendocrine tumor. The GA-68 (commercial name: Netspot) is an injectable that is a binding of radioactive gallium 68 to a somatostatin analog called octreotate. Neuroendocrine tumors have receptors for the hormone somatostatin in over 60% of patients. The tumors therefore will capture the somatostatin as it passes by and of course the radioactive GA-68 bound with it.  Although some other tumor types and even some body parts (pituitary gland for instance) have receptors, if you are the lucky patient whose tumors have these receptors, you can get a good picture of where the tumors are by tracking the radiation.    The PET cameras take pictures of the radiation in the body.  GA-68 scans have been used in Europe for over 15 years already.  Apparently, they were not considered profitable enough to develop, test, and get approval for in the U.S. until recently.

You are probably familiar with CT (xray Computed Tomography) scans.  These take three dimensional xrays of the body.  The new PET machines are actually PET/CT machines. They take the PET and the CT at the same time.

Before now the best we had for neuroendocrine tumors were CT scans, MRIs, and octreoscans which were a much weaker version of the GA-68 type of scan without the attached CT scan.

After my diagnosis, I have had more than six octreoscans (about one per year) and a CT scan every six months and one or two MRIs.  This picture shows the difference between the GA-68 and the octreoscan.

What a difference.  The black dots are areas of high “uptake” meaning attachment to the marker.  My first radiologist showed me my first octreoscan and said “‘nuclear medicine’ is sometimes called ‘unclear medicine’!”  These are not my scans. They were uploaded to Facebook for an example.

Combining the CT scan and the Netspot PET scan in one picture is even more powerful.

The old octreoscan routine was to wait until the end of my 28 day Sandostatin injection cycle then I had to take a laxative the night before and fast until I was given the injection. After the injection we waited 4 hours, then had about an hour laying flat on my back without moving in the nuclear scanner. The hour long scan was repeated the next day and sometimes even a third and fourth day.  I was warned that I would need a doctor’s letter to pass through an airport within 30 days of the injection.   What a pain!

The Netspot PET/CT requires no preparation, no laxative, no fasting.  It could be given 15 days after the last Sandostatin injection and they asked that you not use an octreotide “rescue” injection for a day. You are given the injection, wait an hour, then climb onto the scanner bed pictured above and lay still for less than 40 minutes.  That’s it! Unlike a normal CT scan there are no breathing instructions during the scan (“hold your breath”, “breathe”).  The machine is a bit bigger than a CT scan but is open on both ends so there is no claustrophobia.

Edit: 2017-06-05 Like NETs patients, each medical facility is different. My scan was at Rocky Mountain Cancer Center where Dr. Liu works. Someone just told me that a facility in Arizona is telling patients that they must wait 4 to 6 weeks after their Sandostatin injection to get a Netspot scan.  Also note that Medicare is paying for these scans but how much is paid and the difficulty of getting approval may depend on your add-on plans. As far as all health insurances, I have heard that the scan part is usually covered (perhaps around $1,000). But the Netspot injection is separate and is much more expensive. That is the part insurance companies are unsure about.  Additionally, of course, each medical facility may charge differently for the scans.

NOTE: Josh Mailman who works in the nuclear medicine field and has NETs and is very active in our NETs community shared the searchable map link above and these links:

I am not a doctor or medical person (perhaps a professional patient these days).  The above is my “not a doctor” explanation of some very complex things. I hope that it helps and is not incorrect in any substantive way.

Today, I met with Dr. Eric Liu and discussed my GA-68 scan results.  Both quite positive  and surprising results left me feeling very happy.  It could have been much, much worse.

We will change surveillance to a CT scan once a year and continue with the Sandostatin which is still working. If I get sicker or have more pain, the good scan indicates that I am a good candidate for PRRT (Peptide Receptor Radionuclide Therapy). PRRT works identically to the GA-68 except the gallium 68 is replaced by lutetium 177 (Lutathera) which is much more radioactive and thus capable of killing the tumors. It should be approved in the U.S. within six months which probably means that I can avoid more surgeries.

You can find my explanation of what a GA-68 Netspot scan is here: About the GA-68 Scan

EDIT: There has been tremendous response to these two posts on social media. The most frequent question is “Where can I get a gallium scan?”.  The best resources for this that I can find are: Carcinoid Cancer Foundation: GA-68 Locations, Northern California CarciNET: searchable map of the U.S.

All in all, I should be able to get on with  my life for a few years with minimal interference from this particular cancer.

This log should encourage everyone to get copies of their CT Scans,  MRIs, octreoscans, GA68 scans, and all reports on scans and procedures and test results.  You will often find things that your doctor doesn’t mention.  In the past, when I was with an HMO, my oncologist never went over the radiology reports with me and there were a number of things that I needed to know as well as things she should have known but did not pick up on.

I reported on the positive results of my meeting with Dr. Liu in the post Stability, Carcinoid Cancer 2016-10-27.  At the time, we did not have the actual written radiologist’s report. It is worth understanding that with chronic disease like neuroendocrine, we get many scans and radiologists typically compare previous scans to the present scan.  In this case, October’s scan was compared to the scan from October last year (2015).

That radiology report about the CT scan came to me in the mail Saturday and I was amazed and very happy to read it!

This is HUGE!!! From six visible lesions to one is unexpected, the monthly Sandostatin LAR injections (and of course my good living, Hah!) must be effective.  Of course caution is in order, this is a radiologist that has never seen my scans before.  Also, even lesions too small to see can start to grow again, in fact, it is said that the primary tumor generates microtumors that seed everywhere else.

But this is an even better CT scan report than I thought at the time of meeting with Dr. Liu.  I am certainly really happy and ready to go forward with hope.

All of you who have our disease: Get copies of your scans and reports about scans and test results.  At least try to read them.  It will teach you things and may have good news.

May we all have the best possible outcomes,

My specialist Dr. Liu and I were concerned that perhaps my thyroid function was not good. Since Sandostatin injections can impact that and also ten years ago a nodule was noticed on my thyroid and not really followed up since then, I had an ultrasound last week and the “nodule” was still there. That worried me a lot.
There was also the possibility that my Carcinoid disease was progressing which is always a worry for those of us with the disease. I have been having more episodes of chills in the evening and occasionally night sweats.

Dr. Liu believes the “nodule” is cancer but has not changed significantly in ten years and the test for thyroid function are good.  His recommendation is to revisit it in six months.  He told me that conventional wisdom is usually to remove the thyroid but that he doesn’t agree when it is this slow growing.  I am good with that. The less surgery, the better.

Obviously, I am overjoyed.  It has been 3.5 years since my liver surgery and the carcinoid has been pretty stable.

Other good news is that the new GA-68 scanner will be used for patients starting next week!  I will probably get it in the spring to insure that carcinoid tumors have not spread to any other areas of my body.

My back is still a painful problem.  I have degenerative disk, arthritis and DISH (Diffuse idiopathic skeletal hyperostosis – tendons hardening to calcium).  I have tried a chiropractor and it’s no help. Hopefully today’s CT scan will give my PCP some clues.  I have been attending hot yoga classes for the last eight weeks and that gives me some relief for a day or so, but the pain can still be pretty bad.  I think we will be looking at injections in the spine soon.

No news about solutions to the urinary bladder cancer problem as of yet.