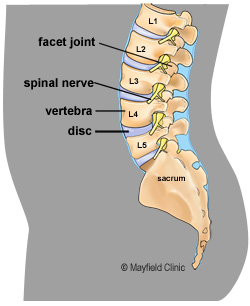 If you follow this blog, you know that I have been struggling to get a surgeon who would help me with my spinal and sciatic pain.  Although the surgery is simple (as spine surgery goes), my neuroendocrine cancer makes me a “special case” because there’s a tumor in L3 and the surgery is for L5 – L4. A surgeon who refused to see me told me to see Dr. Anant Kumar.  He takes us “special cases”.  He agreed to take me and it seems to be working well.

Here is the problem we are trying to solve. It is called spinal stenosis. It means that the channel that the spinal cord runs in is narrowing and thus squeezing the spinal cord.  In my case the canal Vertebral Foramen through the L5 – L4 was narrow for 4 reasons:

The anesthesiologist, Dr. Santangelo took extreme care knowing that I had neuroendocrine cancer and that I had had a carcinoid crisis once before.  I am told that two times the blood pressure did drift down where it shouldn’t be and he had to put more octreotide in the drip and the BP came back. Remember “special case”?  It was good that the surgery took place at Presbytarian/St Luke’s Hospital where my neuroendocrine specialist, Dr. Liu works.  Dr. Liu has done much to train the personnel about neuroendocrine and carcinoid crisis.

Both of the doctors working with me were great.  I feel very fortunate.  The sciatica pain, the numbness, tingling and weakness in my feet is gone!

Dr. Kumar tells me the arthritis pain in the back will remain.  That’s OK, assuming that I can walk and fish again.

Thursday I can go to my sister Sarah’s for a huge Thanksgiving dinner.  Hurrah!

I had another day surgery today for urinary bladder cancer and just returned home.  For the fourth time, cancer had to be scraped from the inside of my urinary bladder.  After the tumor was removed a type of chemo (mitomycin C) was left in my bladder. Although the procedure itself was about an hour long, Laurie and I spent from 9:30am until about 4:00pm in the hospital. I have to wear a Foley catheter for two days and then remove it.

The original anesthesiologist assigned to me was delayed in another surgery, I was assigned another one.  He decided to use the same procedures that were used during this procedure in April.  He thanked me for giving him a chance to study a disease he had only heard of in school but never seen (neuroendocrine cancer). I made sure that the octreotide was there and ready when I was wheeled to the operation room. In fact, we had to wait for the pharmacy to deliver it, even though the originally assigned anesthesiologist had ordered it.  The doctor told me that the pharmacist had to look up recommendations and dosages because they had not used it before.  At the pre-operation meeting a week ago,  I had given the doctors copies of Dr. Woltering’s protocol, Dr. O’dorisio’s protocol and Dr. Pommier’s protocol.

In any case, all went well.

The larger problem is that this bladder cancer has recurred several times now.  This summer, I was given the BCG immunology treatment for six weeks.  That is supposed to be 70% effective in preventing bladder cancer recurrence.  Obviously, it did not work.  My doctor is searching for other solutions.  He says that there is some evidence (that means not proven with acceptable studies) that interferon added to the BCG can help.  He is unsure of it and also insurance would probably not cover it. I will probably re-do the BCG treatment in any case.  My doctor has also checked for any drug studies that I could enroll in.  So far, three studies have turned me down because I also have neuroendocrine cancer.

We will have to keep searching.  I really do not want to have this procedure every six months until my bladder walls are so thin they have to remove my bladder.

A. I have been seeing a chiropractor for five weeks now, twice a week because I have severe back pain.  Two problems plague me:

So far the chiropractic treatment has managed to move the pain around but not reduce it much although  I do have a few good days which is good. My PCP also prescribed a treatment of prednisone for me. The drug got rid of sudden shooting pains I had, but the rest was not changed.

I have also been trying hot yoga for it, for stretching and increasing flexibility.  After an hour of that, I am usually more comfortable for 12 to 36 hours.  I’ll keep that up.

B. Next week, I get to see my NETs specialist, Dr. Eric Liu. We’ll decide on my next scans, blood tests, etc. And, I will talk about a little bit of increase in symptoms.  Which would be more frequent pain in abdomen, more frequent diarrhea, more fatigue. Of course, I’ll get my monthly Sandostatin injection (or jab as the British say which is appropriate for this.)

C. Finally the good stuff.  We love, love, love our new little granddaughter Margot.  She is very different from our grandsons.  All is well, very healthy with her and her mom.

May we all have the best possible outcomes,